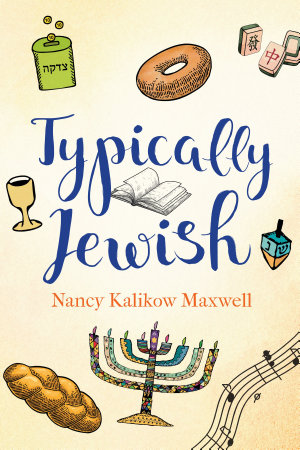 
"In eight "trait" chapters --Worrying, Kvelling, Dying, Noshing, Laughing, Detecting, Dwelling, and Joining-- "more deli than deity" writer Nancy Kalikow Maxwell offers ancient and contemporary insight into what it means to be "typically Jewish" today in America. The following "Typically Jewish, Atypically Fun" Discussion Guide gets participants schmoozing on how they live, love, work, eat, and even plan to die as Jews." -- 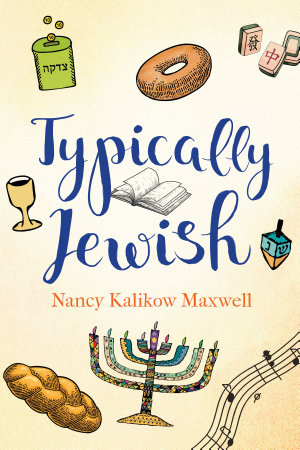 
Is laughter essential to Jewish identity? Do Jews possess special radar for recognizing members of the tribe? Since Jews live longer and make love more often, why don’t more people join the tribe? “More deli than deity” writer Nancy Kalikow Maxwell poses many such questions in eight chapters—“Worrying,” “Kvelling,” “Dying,” “Noshing,” “Laughing,” “Detecting,” “Dwelling,” and “Joining”—exploring what it means to be “typically Jewish.” While unearthing answers from rabbis, researchers, and her assembled Jury on Jewishness (Jewish friends she roped into conversation), she—and we—make a variety of discoveries. For example: Jews worry about continuity, even though Rabbi Mordechai of Lechovitz prohibited even that: “All worrying is forbidden, except to worry that one is worried.” Kvell-worthy fact: About 75 percent of American Jews give to charity versus 63 percent of Americans as a whole. Since reciting Kaddish brought secular Jews to synagogue, the rabbis, aware of their captive audience, moved the prayer to the end of the service. Who’s Jewish? About a quarter of Nobel Prize winners, an estimated 80 percent of comedians at one point, and the winner of Nazi Germany’s Most Perfect Aryan Child Contest. Readers will enjoy learning about how Jews feel, think, act, love, and live. They’ll also schmooze as they use the book’s “Typically Jewish, Atypically Fun” discussion guide. 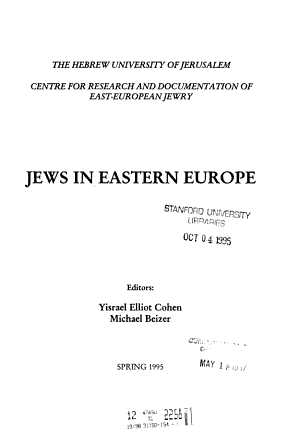 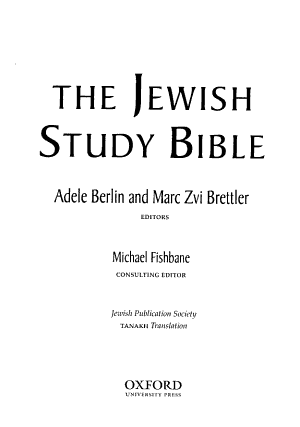 
Oxford University Press breaks exciting new ground in the field of study Bibles with The Jewish Study Bible. This innovative volume will, for the first time, offer readers of the Hebrew Bible a resource that is specifically tailored to meet their needs. The JSB presents the center of gravity of the Scriptures where Jews experience it--in Torah. It offers readers the fruits of various schools of Jewish traditions of biblical exegesis (rabbinic, medieval, mystical, etc.) and provides them with a wealth of ancillary materials that aid in bringing the ancient text to life. The nearly forty contributors to the work represent the cream of Jewish biblical scholarship from the world over. The JSB uses The Jewish Publication Society TANAKH Translation, whose name is an acronym formed from the Hebrew initials of the three sections into which the Hebrew Bible is traditionally divided (Torah, Instruction; Nevi'im, Prophets; and Kethubim, Writings). A committee of esteemed biblical scholars and rabbis from the Orthodox, Conservative, and Reform Judaism movements produced this modern translation, which dates from 1985. Unlike other English translations based upon such ancient versions as the Septuagint and Vulgate, which emend the Hebrew text, TANAKH is faithful to the original text. Conservative, Reform and Reconstructionist Jews, professors, students, rabbis: indeed, anyone interested in acquiring a fuller understanding of the riches of the Hebrew Bible will profit from reading The Jewish Study Bible. 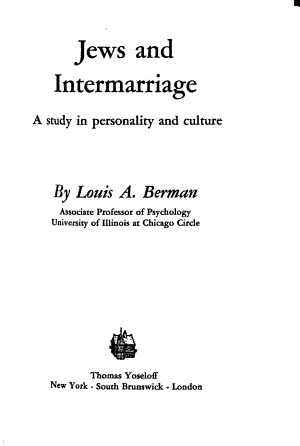 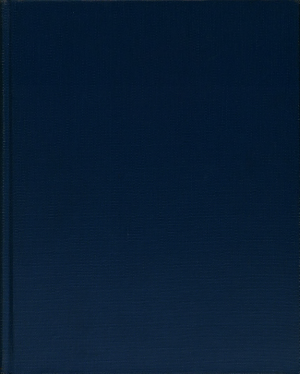 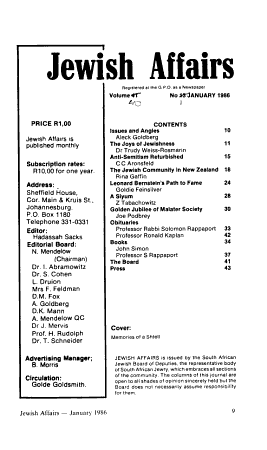 
American Jews' mobilization on behalf of Soviet Jews is typically portrayed as compensation for the community's inability to assist European Jews during World War II. Yet, as Pauline Peretz shows, the role Israel played in setting the agenda for a segment of the American Jewish community was central. Her careful examination of relations between the Jewish state and the Jewish diaspora offers insight into Israel's influence over the American Jewish community and how this influence can be conceptualized. To explain how Jewish emigration moved from a solely Jewish issue to a humanitarian question that required the intervention of the US government during the Cold War, Peretz traces the activities of Israel in securing the immigration of Soviet Jews and promoting awareness in Western countries. Peretz uses mobilization studies to explain a succession of objectives on the part of Israel and the stages in which it mobilized American Jews. Peretz attempts to reintroduce Israel as the missing, yet absolutely decisive actor in the history of the American movement to help Soviet Jews emigrate in difficult circumstances. 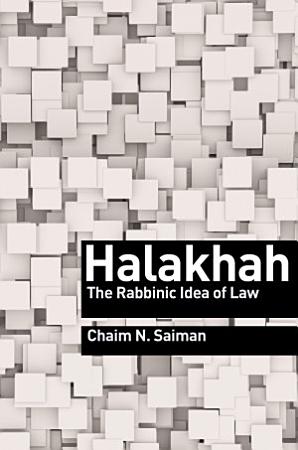 
How the rabbis of the Talmud transformed Jewish law into a way of thinking and talking about everything Typically translated as "Jewish law," halakhah is not an easy match for what is usually thought of as law. This is because the rabbinic legal system has rarely wielded the political power to enforce its rules, nor has it ever been the law of any state. Even more idiosyncratically, the talmudic rabbis claim the study of halakhah is a holy endeavor that brings a person closer to God—a claim no country makes of its law. Chaim Saiman traces how generations of rabbis have used concepts forged in talmudic disputation to do the work that other societies assign not only to philosophy, political theory, theology, and ethics but also to art, drama, and literature. Guiding readers across two millennia of richly illuminating perspectives, this panoramic book shows how halakhah is not just "law" but an entire way of thinking, being, and knowing. 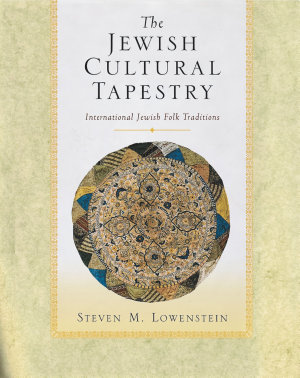 
Here, in one compact volume, is an illuminating survey of Jewish folkways on five continents. Filled with fascinating facts and keen insights, The Jewish Cultural Tapestry is a richly woven fabric that vividly captures the diversity of Jewish life. All Jews are bound together by the common thread of the Torah and the Talmud, notes author Steven Lowenstein, but this thread takes on a different coloration in different parts of the world, as Jewish tradition and local non-Jewish customs intertwine. Lowenstein describes these widely varying regional Jewish cultures with needlepoint accuracy, highlighting the often surprising similarities between Jewish and non-Jewish local traditions, and revealing why Jewish customs vary as much as they do from region to region. We visit the great Ashkenazic and Sephardic cultures of Europe and the Mediterranean; the unique Jewish cultures of Iraq, Persia, Ethiopia and Yemen; the little-known cultures of the Bukharian Jews of Central Asia, the Cochin Jews of India, and the Kaifeng Jews of China. We read about regional religious practices, wedding ceremonies and marriage customs; different traditions of Jewish music and Jewish dress; and the origins of Jewish names. Lowenstein also surveys Jewish cuisine around the world, offering easy-to-prepare traditional recipes, ranging from kugel and blintzes to Malawach from Yemen, T'beet from Iraq, Mina de Cordero from Turkey, and Passover Soup from Uzbekistan. From Europe to India, Israel to America, The Jewish Cultural Tapestry offers an engaging overview of the customs and folkways of a people united by tradition, yet scattered to the far corners of the earth. Packaged in an attractive large format, this beautifully illustrated volume would be a meaningful gift for the holidays. 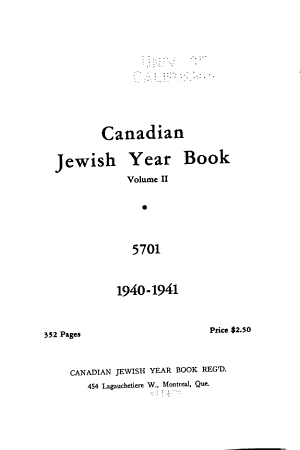 
Includes lists of institutions and societies. 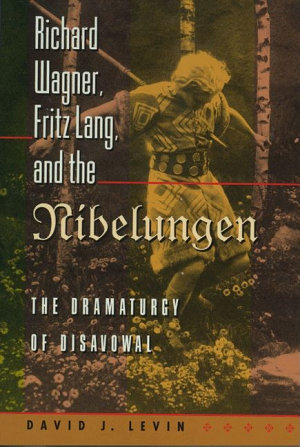 
This highly original book draws on narrative and film theory, psychoanalysis, and musicology to explore the relationship between aesthetics and anti-Semitism in two controversial landmarks in German culture. David Levin argues that Richard Wagner's opera cycle Der Ring des Nibelungen and Fritz Lang's 1920s film Die Nibelungen creatively exploit contrasts between good and bad aesthetics to address the question of what is German and what is not. He shows that each work associates a villainous character, portrayed as non-Germanic and Jewish, with the sometimes dramatically awkward act of narration. For both Wagner and Lang, narration--or, in cinematic terms, visual presentation--possesses a typically Jewish potential for manipulation and control. Consistent with this view, Levin shows, the Germanic hero Siegfried is killed in each work by virtue of his unwitting adoption of a narrative role. Levin begins with an explanation of the book's theoretical foundations and then applies these theories to close readings of, in turn, Wagner's cycle and Lang's film. He concludes by tracing how Germans have dealt with the Nibelungen myths in the wake of the Second World War, paying special attention to Michael Verhoeven's 1989 film The Nasty Girl. His fresh and interdisciplinary approach sheds new light not only on Wagner's Ring and Lang's Die Nibelungen, but also on the ways in which aesthetics can be put to the service of aggression and hatred. The book is an important contribution to scholarship in film and music and also to the broader study of German culture and national identity.