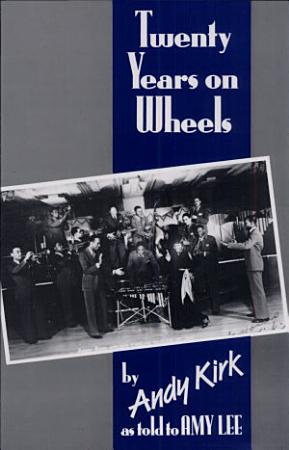 
Kirk describes his life as a traveling jazz musician 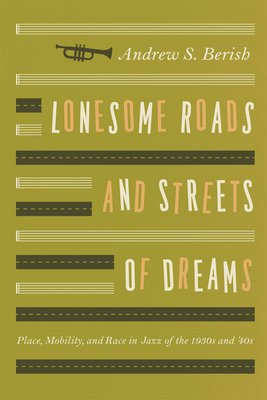 
Any listener knows the power of music to define a place, but few can describe the how or why of this phenomenon. In Lonesome Roads and Streets of Dreams: Place, Mobility, and Race in Jazz of the 1930s and ’40s, Andrew Berish attempts to right this wrong, showcasing how American jazz defined a culture particularly preoccupied with place. By analyzing both the performances and cultural context of leading jazz figures, including the many famous venues where they played, Berish bridges two dominant scholarly approaches to the genre, offering not only a new reading of swing era jazz but an entirely new framework for musical analysis in general, one that examines how the geographical realities of daily life can be transformed into musical sound. Focusing on white bandleader Jan Garber, black bandleader Duke Ellington, white saxophonist Charlie Barnet, and black guitarist Charlie Christian, as well as traveling from Catalina Island to Manhattan to Oklahoma City, Lonesome Roads and Streets of Dreams depicts not only a geography of race but how this geography was disrupted, how these musicians crossed physical and racial boundaries—from black to white, South to North, and rural to urban—and how they found expression for these movements in the insistent music they were creating. 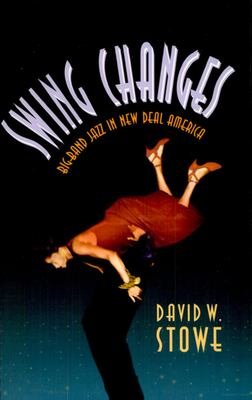 
Drawing on memoirs, oral histories, newspapers, magazines, recordings, photographs, literature, and films, Stowe looks at New Deal America through its music and shows us how the contradictions and tensions within swing--over race, politics, its own cultural status, the role of women--mirrored those played out in the larger society. 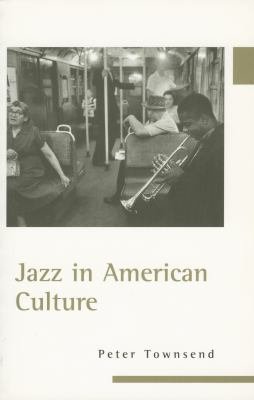 
The family of musical styles known as jazz came into being around 1900 as several popular black musical idioms coalesced. This free-flowing, spontaneous music based in improvisation emerged primarily from ragtime and the blues. But jazz did not remain solely in the domain of American music, for very quickly it swept through virtually all of the national culture as fiction, poetry, film, photography, painting, and classical music came under its spell. If it's art that expresses a nation's essence best, then jazz set America's tempo and afforded an artistic pattern for modernism. In this book for the nonspecialist Peter Townsend shows how during an entire century jazz has appeared in a wide diversity of times and places and in many different cultural settings. He reveals how jazz surfaced early in America's movies (The Jazz Singer, Strike Up the Band, Orchestra Wives, Blues in the Night) and how it became an aesthetic model serious composers (George Gershwin, Aaron Copland) did not miss. Jazz has punctuated literary fiction (Ralph Ellison, Eudora Welty, James Baldwin, John Clellon Holmes, Jack Kerouac, Toni Morrison) and American poetry (William Carlos Williams, Carl Sandburg, Langston Hughes, Percy Johnson). Jazz influenced painting (Jackson Pollock, Romare Bearden, Stuart Davis, Archibald Motley, and Jimmy Ernst), and several photographers have devoted their careers to documenting jazz performers and their music scene (William Claxton, William Gottlieb, Roy De Carava, Carol Reiff). Townsend probes the deep-rooted mythology that holds jazz as indefinable, unteachable, and instinctive with blacks but tough for whites and that its birthplace was New Orleans brothels, that its musicians live tragic lives, and that jazz is dominated by males and despises whiffs of the mainstream. As modernism swayed to the tempos of jazz and adapted to its modes, the once clearly defined lines of demarcation faded and jazz became well established as one of the great musical cultures of the world. Peter Townsend is a senior lecturer in the School of Music and Humanities at the University of Huddersfield in England. Copublished with Edinburgh University Press For sale in the U.S.A., Canada, and U.S. dependencies only 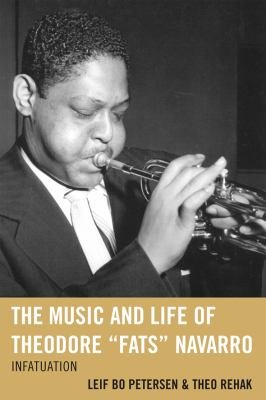 
This is the first comprehensive study of the music and life of Theodore 'Fats' Navarro. It provides biographical, discographical, and analytical information on the trumpeter and his recorded legacy, offering new perspectives on Navarro's role in the history and emergence of Bebop. 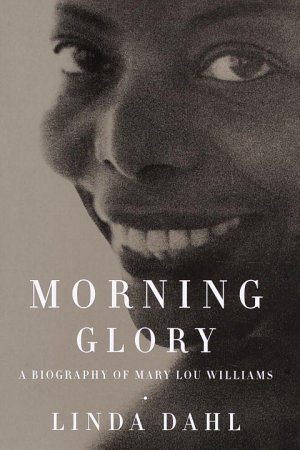 
Mary Lou Williams -- pianist, arranger, composer, and probably the most influential woman in the history of jazz -- receives the attention she has long deserved in the definitive biography by a leading scholar of women in jazz. The illegitimate child of an impoverished and indifferent mother, Williams began performing publicly at the age of seven when she became known admiringly in her native Pittsburgh as "the little piano girl of East Liberty," playing one day for the Mellons at bridge teas and the next in gambling dens where the hat was passed for change. She grew up with the jazz of the early part of the century, championed by the likes of Earl Hines and Fats Waller, yet unlike so many other musicians of her time, she was open to new forms in jazz -- she was an early champion of bop, and a mentor and colleague to its central figures, such as Thelonius Monk and Bud Powell -- and in broader musical styles as well (after her conversion to Catholicism, she wrote masses and other sacred music). Most of the other famous women in jazz -- Billie Holiday, Ella Fitzgerald -- have been singers. Williams was instead a phenomenal pianist who performed solo, with small groups and big bands, in vaudeville and clubs, and on numerous records. But she is equally well known today as a composer and arranger of remarkable versatility and power, having worked with, among others, Duke Ellington and Benny Goodman. Her compositions have been recorded by artisits as varied as Marian McPartland, Dizzy Gillespie, Nat "King" Cole, Sarah Vaughan, Ella Fitzgerald, and herself -- and, more recently, by cutting-edge players Geri Allen and Dave Douglas. But Williams was more than "just a musician"; her interests were catholic in both senses, and she struggled to combine her love of music with her love of God. She was a tireless humanitarian, and made ongoing attempts to help dozens of down-and-out musicians; in the 1950s, her apartment was, at times, virtually a rehab. Though she was often in emotional despair, she found comfort for her many disappointments and hurts not only in her music but in her spirituality. Linda Dahl, granted unprecedented access to the large Williams archive, has given us the whole of Williams's very full life, from her often harrowing days on the road to her tumultuous marriages and love affairs, from the ups and downs of her unique fifty-year career to the remarkable spirituality that came to inform both her daily life and her music. This is a striking protrait of one of our least understood and most important musicians. 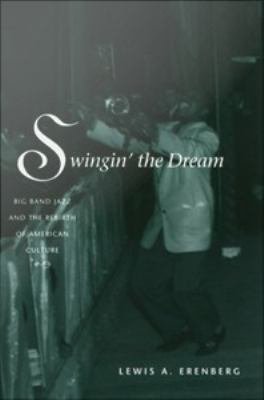 
During the 1930s, swing bands combined jazz and popular music to create large-scale dreams for the Depression generation, capturing the imagination of America's young people, music critics, and the music business. Swingin' the Dream explores that world, looking at the racial mixing-up and musical swinging-out that shook the nation and has kept people dancing ever since. "Swingin' the Dream is an intelligent, provocative study of the big band era, chiefly during its golden hours in the 1930s; not merely does Lewis A. Erenberg give the music its full due, but he places it in a larger context and makes, for the most part, a plausible case for its importance."—Jonathan Yardley, Washington Post Book World "An absorbing read for fans and an insightful view of the impact of an important homegrown art form."—Publishers Weekly "[A] fascinating celebration of the decade or so in which American popular music basked in the sunlight of a seemingly endless high noon."—Tony Russell, Times Literary Supplement 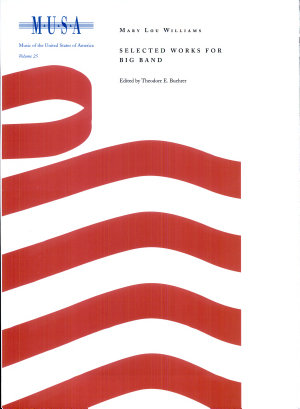 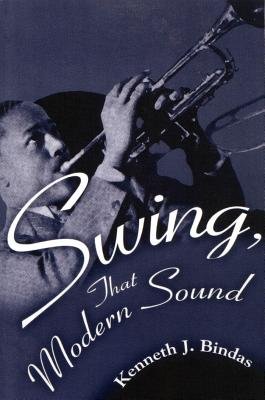 
It was for stage bands, for dancing, and for a jiving mood of letting go. Throughout the nation swing re-sounded with the spirit of good times. But this pop genre, for a decade America's favorite, arose during the worst of times, the Great Depression. From its peak in the 1930s until bebop, r & b, and country swamped it after World War II, swing defined an American generation and measured America's musical heartbeat. In its heyday swing reached a mass audience of very disparate individuals and united them. They perceived in the tempers and tempos of swing the very definition of modernity. A survey of the thirties reveals that the time was indeed the Swing Era, America's segue into modernity. What social structures encouraged swing's creation, acceptance, and popularity? Swing, That Modern Sound examines the cultural and historical significance of swing and tells how and why it achieved its audience, unified its fans, defined its generation, and, after World War II, fell into decline. What fed the music? And, in turn, what did the music feed? This book shows that swing manifested the kind of up-to-date allure that the populace craved. Swing sounded modern, happy, optimistic. It flouted the hardship signals of the Great Depression. The key to its rise and appeal, this book argues, was its all-out appropriation of modernity--consumer advertising, the language and symbols of consumption, and the public's all-too-evident wish for goods during a period of scarcity. As it examines the role of race, class, and gender in the creation of this modern music, Swing, That Modern Sound tells how a music genre came to symbolize the cultural revolution taking place in America. Kenneth J. Bindas is an associate professor of history at Kent State University, Trumbull Campus, in Warren, Ohio. He is the author of All of This Music Belongs to the Nation: The WPA's Federal Music Project and American Society, 1935--1939. 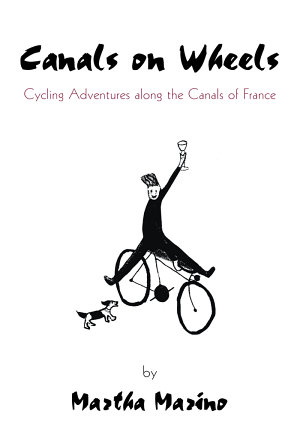 
Canals on Wheels is a collection of stories about Martha Marino's solo bicycle trips taken during the summers along nine canals in France. She describes her bike route, the towns and places she visited, her camping experiences and the interesting people she met. Martha has published other books: Asian Adventure, Backpacking in the Middle East, and African Journal. Her magazine articles appeared in This is Japan, Ski Magazine and Illustrated India and her travel articles have been in Laguna Beach's newspapers The News Post, The Laguna Beach Independent, and Laguna Beach Coastline Pilot. Martha began bike touring in her 60's and since then has cycled all over Europe, Prince Edward Island in Nova Scotia, the Gulf Islands, and down the Pacific Coast from Washington to California. Two of her greatest passions are bike touring and traveling. If you like reading about cycling adventures and France, you'll enjoy this book. 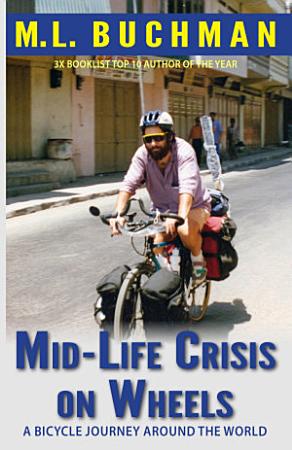 
Cutting-edge computer systems designer. Crisis project manager. Consultant to the Fortune 100. Utter workaholic. Before he became a writer, M.L. “Matt” Buchman had dreamed of traveling the world by sailboat or small plane. Not once did he think about doing it by bicycle — not until he lost everything: career, house he’d been remodeling for the family he never had time to find, sense of self, all of it. Broke and burned out at thirty-five, he sold everything, climbed on his bicycle Junior, and together they headed out on a journey of unknown duration. His one guide? Following the setting sun west. 11,000 miles through eighteen countries. A voyage of adventure, discovery, and rebuilding a life. But mostly? A journey of discovering hope and the unexpected possibilities of the future. 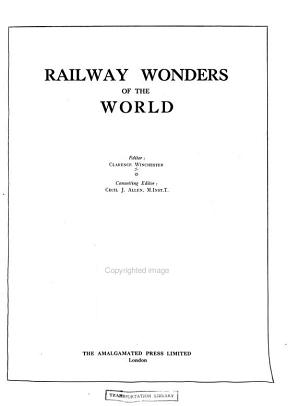