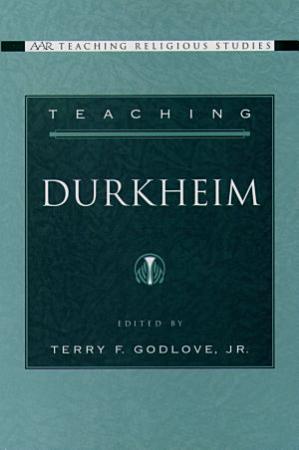 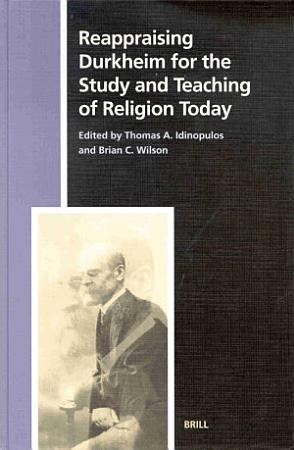 
Reappraising Durkheim for the Study and Teaching of Religion Today brings together ten new essays in which noted sociologists, psychologists, phenomenologists, philosophers, and historians of religion grapple with the questions Durkheim raised and the solutions he proposed for the academic study of religion. 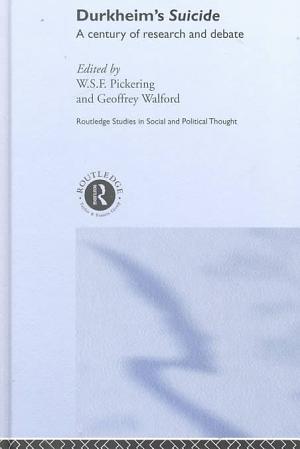 
Durkeim's book on suicide, first published in 1897, is widely regarded as a classic text, and is essential reading for any student of Durkheim's thought and sociological method. This book examines the continuing importance of Durkheim's methodology. The wide-ranging chapters cover such issues as the use of statistics, explanation of suicide, anomie and religion and the morality of suicide. It will be of vital interest to any serious scholar of Durkheim's thought and to the sociologist looking for a fresh methodological perspective. 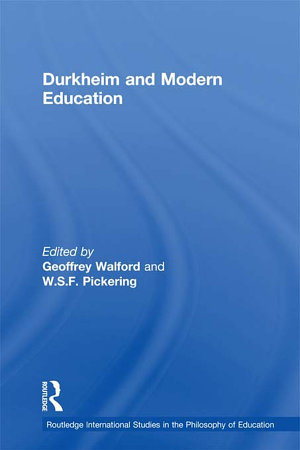 
This volume explores Durkheim's place in modern educational thought at three different levels: * Durkheim's ideas on education are analyzed and placed in the context of modern society * current educational issues are explored using a Durkheimian framework * Durkheim's thought is related to that of modern educational theorists to reveal his enduring influence In discussing Durkheim's modern relevance, the contributors stress his desire to integrate the practical and theoretical aspects of education. They identify particular pertinence in his focus upon the moral base of education and his insistence upon the importance of the social and society. 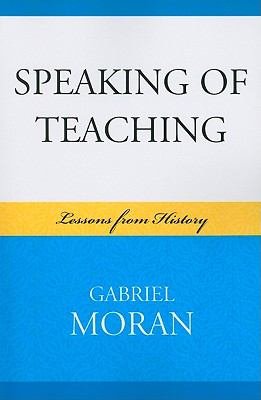 
Speaking of Teaching: Lessons from History focuses on teaching as a fundamental act of all human beings, viewing the question of teaching through the lens of five famous thinkers and two contemporary problems. Moran argues that teaching is not given the attention that it deserves and proposes to situate school teaching in the context of many forms of teaching. Tracing the history of the idea of teaching from Socrates to Wittgenstein in the first several chapters, this book also examines the intricacies of teaching morality and religion, showcasing society's ambivalence about teaching. 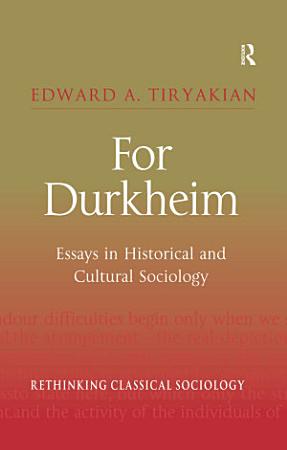 
For Durkheim is a timely and original contribution to the debate about Durkheim at a time when his concerns on ethics, morality and civil religion have much relevance for our own troubled and divided society. It includes two new essays from Edward A. Tiryakian’s collection on the Danish Muhammad cartoons and September 11th, providing contemporary relevance to the debate and an analytical and interpretive introduction indicating the ongoing importance of Durkheim within sociology. This indispensable volume for all serious Durkheim scholars includes English translations of papers previously published in French for the first time, and will be of interest to sociologists, anthropologists, social historians and those interested in critical questions of modernity. 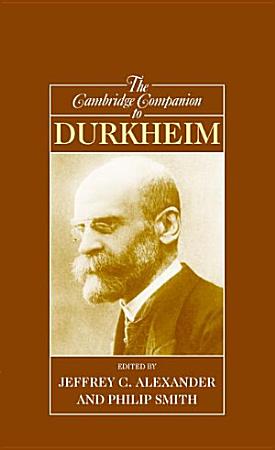 
Long recognised as a foundational figure in the development of social scientific thought, Emile Durkheim's work has been the subject of intense debate over the years. This authoritative and comprehensive collection of essays re-examines the impact of Durkheim's thought, considering the historical contexts of his work as well as evaluating his ideas in relation to current issues and controversies. Eminent authorities in the field have contributed to this up-to-date overview, giving the reader - both students and academics - a chance to engage directly with leading figures in the field about contemporary trends, ideas and dilemmas. This volume reflects the cross-disciplinary application of Durkheim's theories and will interest scholars of anthropology, political science, cultural studies and philosophy, as well as sociology. This is a landmark volume that redefines the relevance of Durkheim to the human sciences in the twenty-first century. 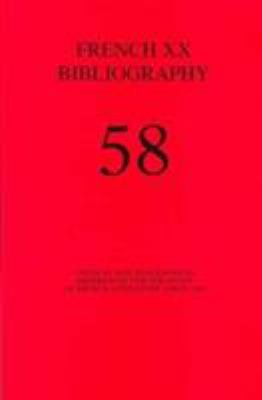 
Provides the listing of books, articles, and book reviews concerned with French literature since 1885. This is a reference source in the study of modern French literature and culture. It contains nearly 8,800 entries. 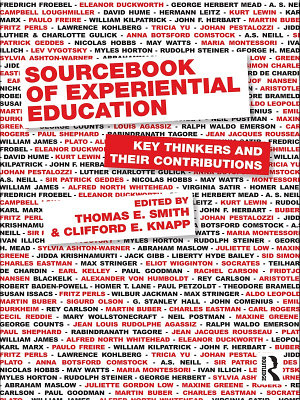 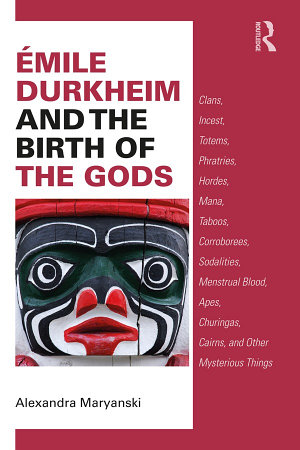 
The Birth of the Gods is dedicated to Durkheim's effort to understand the basis of social integration. Unlike most social scientists, then and now, Durkheim concluded that humans are naturally more individualistic than collectivistic, that the primal social unit for humans is the macro-level unit ('the horde'), rather than the family, and that social cohesion is easily disrupted by human self-interest. Hence, for Durkheim, one of the "gravest" problems facing sociology is how to mold these human proclivities to serve the collective good. The analysis of elementary religions, Durkheim believed, would allow social scientists to see the fundamental basis of solidarity in human societies, built around collective representations, totems marking sacred forces, and emotion-arousing rituals directed at these totems. The first half of the book traces the key influences and events that led Durkheim to embrace such novel generalizations. The second part makes a significant contribution to sociological theory with an analysis that essentially "tests" Durkheim's core assumptions using cladistic analysis, social network tools and theory, and data on humans closest living relatives—the great apes. Maryanski marshals hard data from primatology, paleontology, archaeology, genetics, and neuroscience that enlightens and, surprisingly, confirms many of Durkheim’s speculations. These data show that integration among both humans and great apes is not so much group or kin oriented, per se, but orientation to a community standing outside each individual that includes a sense of self, but also encompassing a cognitive awareness of a "sense of community" or a connectedness that transcends sensory reality and concrete social relations. This "community complex," as Maryanski terms it, is what Durkheim was beginning to see, although he did not have the data to buttress his arguments as Maryanski is able to do. 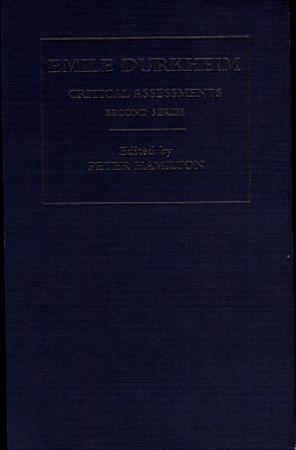 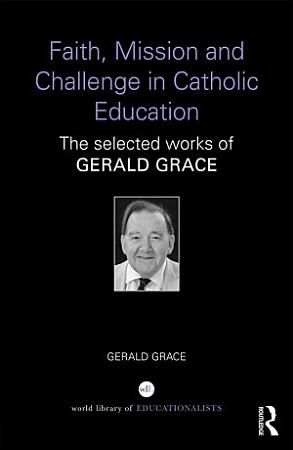 
In the World Library of Educationalists, international experts compile career-long collections of what they judge to be their finest pieces – extracts from books, key article, salient research findings, major theoretical and practical contributions – so the world can read them in a single manageable volume. Readers will be able to follow the themes and strands and see how their work contributes to the development of the field. Gerald Grace is renowned internationally for his research and teaching in the areas of Catholic education, spirituality, leadership and effectiveness in faith schooling, and educational policy. In Faith, Mission and Challenge in Catholic Education, Gerald Grace brings together 15 of his key writings in one place. Starting with a specially written Introduction, which gives an overview of his career and contextualises his selection within the development of the field, the chapters cover: - the interactions of faith, mission and spirituality in the development of Catholic education - how to replace ideology, polemic and prejudice in discussions about faith-based schooling with evidence-based argument - understanding the distinctive nature of concepts such as ‘leadership’ and ‘effectiveness’ in faith-based education - using ‘mission integrity’ as a key concept for the evaluation of contemporary Catholic schooling - examining the interactions of Catholic values, Catholic curriculum and educational policy developments. This book not only shows how Gerald Grace’s thinking developed during his career, it also gives an insight into the development of the fields to which he contributed.