1 Read eBook for: scribal authorship and the writing of history in medieval england [PDF]


Based on new readings of some of the least-read texts by some of the best-known scribes of later medieval England, Scribal Authorship and the Writing of History in Medieval England reconceptualizes medieval scribes as authors, and the texts surviving in medieval manuscripts as authored. Culling evidence from history writing in later medieval England, Matthew Fisher concludes that we must reject the axiomatic division between scribe and author. Using the peculiarities of authority and intertextuality unique to medieval historiography, Fisher exposes the rich ambiguities of what it means for medieval scribes to “write” books. He thus frames the composition, transmission, and reception—indeed, the authorship—of some medieval texts as scribal phenomena. History writing is an inherently intertextual genre: in order to write about the past, texts must draw upon other texts. Scribal Authorship demonstrates that medieval historiography relies upon quotation, translation, and adaptation in such a way that the very idea that there is some line that divides author from scribe is an unsustainable and modern critical imposition. Given the reality that a scribe's work was far more nuanced than the simplistic binary of error and accuracy would suggest, Fisher completely overturns many of our assumptions about the processes through which manuscripts were assembled and texts (both canonical literature and the less obviously literary) were composed. 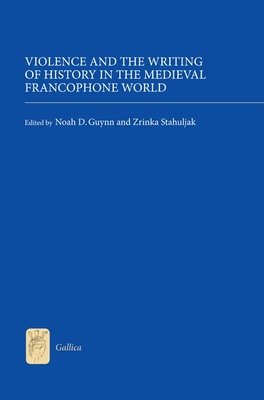 
An examination of medieval historican writings through the prism of violence. 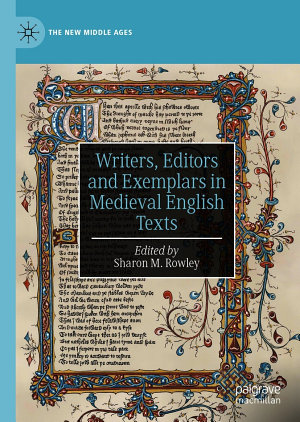 
This collection of essays explores the literary legacy of medieval England by examining the writers, editors and exemplars of medieval English texts. In order to better understand the human agency, creativity and forms of sanctity of medieval England, these essays investigate both the production of medieval texts and the people whose hands and minds created, altered and/or published them. The chapters consider the writings of major authors such as Chaucer, Gower and Wyclif in relation to texts, authors and ideals less well-known today, and in light of the translation and interpretive reproduction of the Bible in Middle English. The essays make some texts available for the first time in print, and examine the roles of historical scholars in the construction of medieval English literature and textual cultures. By doing so, this collection investigates what it means to recover, study and represent some of the key medieval English texts that continue to influence us today. 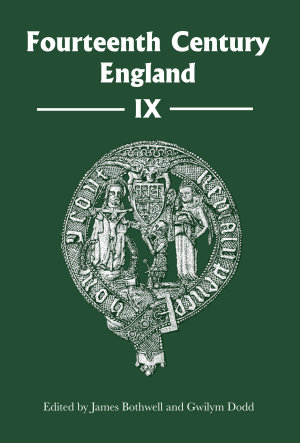 
Articles showcasing the fruits of the most recent scholarship in the field of fourteenth-century studies. 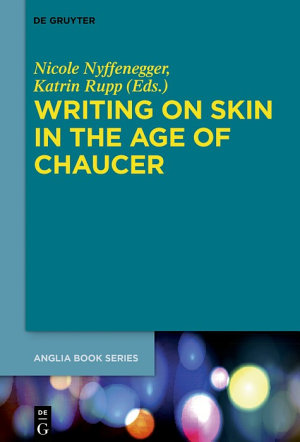 
Owing to its relatedness to parchment as the primary writing matter of the Middle Ages, human skin was not only a topic to write about in medieval texts, it was also conceived of as an inscribable surface, both in the material and in the figurative sense. This volume explores the textuality of human skin as discussed by Geoffrey Chaucer and other writers (medical, religious, philosophical, and literary) of the fourteenth and fifteenth century. It presents four main aspects of the complex relations between text, parchment, and human skin as they have been discussed in recent scholarship. These four aspects are, first, the (mostly figurative) resonances between parchment-making and transformations of human skin, second, parchment as a space of contact between animal and human spheres, third, human skin and parchment as sites where (gender) identities are negotiated, and fourth, the place of medieval skin studies within cultural studies and its relationship to the major concerns of cultural studies: the difficult demarcation of skin from body, the instability of any inscription, and the skin’s precarious state as an entity of its own. 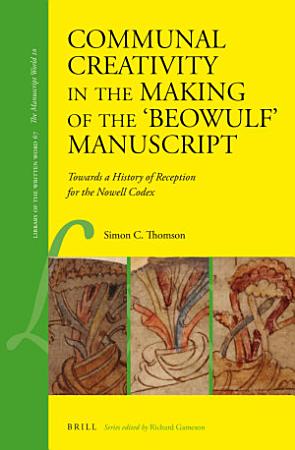 
In Communal Creativity in the Making of the ‘Beowulf’ Manuscript, Simon Thomson analyses details of scribal activity to tell a story about the project that preserved Beowulf as one of a collective, if error-strewn, endeavour. 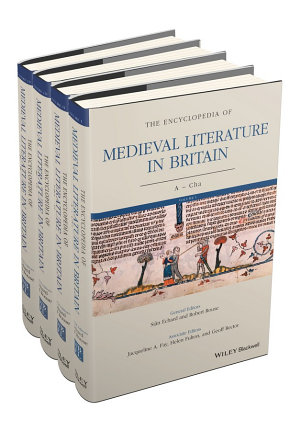 
Bringing together scholarship on multilingual and intercultural medieval Britain like never before, The Encyclopedia of Medieval Literature in Britain comprises over 600 authoritative entries spanning key figures, contexts and influences in the literatures of Britain from the fifth to the sixteenth centuries. A uniquely multilingual and intercultural approach reflecting the latest scholarship, covering the entire medieval period and the full tapestry of literary languages comprises over 600 authoritative yet accessible entries on key figures, texts, critical debates, methodologies, cultural and isitroical contexts, and related terminology Represents all the literatures of the British Isles including Old and Middle English, Early Scots, Anglo-Norman, the Norse, Latin and French of Britain, and the Celtic Literatures of Wales, Ireland, Scotland and Cornwall Boasts an impressive chronological scope, covering the period from the Saxon invasions to the fifth century to the transition to the Early Modern Period in the sixteenth Covers the material remains of Medieval British literature, including manuscripts and early prints, literary sites and contexts of production, performance and reception as well as highlighting narrative transformations and intertextual links during the period 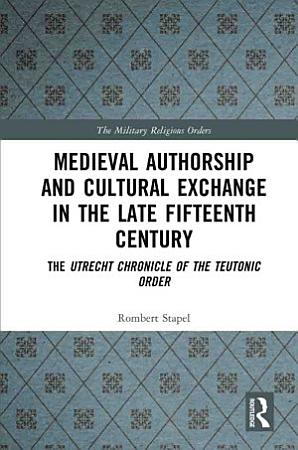 
Medieval Authorship and Cultural Exchange in the Late Fifteenth Century is a multidisciplinary study of late medieval authorship and the military orders, framed as a whodunit that uncovers the anonymous author of the ‘Utrecht Chronicle of the Teutonic Order’. Through a close analysis of the Utrecht Chronicle of the Teutonic Order and its manuscripts, and by exploiting a wide range of scholarly techniques, from traditional philology and extensive codicological examinations to modern digital humanities techniques, the book argues that the recently resurfaced Vienna manuscript is actually an author’s copy, written in direct cooperation with the original author. This important assertion leads to a reinterpretation of the text, its sources and composition, authorship, and the context in which it was conceived. It allows us to associate the text with an upsurge of historiographical activities by various military orders across the continent, seemingly in response to the publication and aggressive dissemination of the account of the Siege of Rhodes by Guillaume Caoursin in 1480. Furthermore, the text can be positioned at the crossroads between different cultural spheres, ranging from the Baltic region to the Low Countries, spanning French, German, Dutch, and Latin linguistic traditions. This book will appeal to scholars and students of medieval history, as well as those interested in cultural history and the military religious orders. 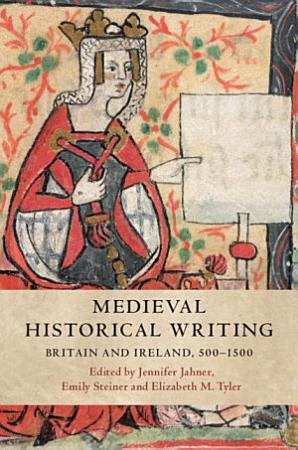 
History writing in the Middle Ages did not belong to any particular genre, language or class of texts. Its remit was wide, embracing the events of antiquity; the deeds of saints, rulers and abbots; archival practices; and contemporary reportage. This volume addresses the challenges presented by medieval historiography by using the diverse methodologies of medieval studies: legal and literary history, art history, religious studies, codicology, the history of the emotions, gender studies and critical race theory. Spanning one thousand years of historiography in England, Wales, Ireland and Scotland, the essays map historical thinking across literary genres and expose the rich veins of national mythmaking tapped into by medieval writers. Additionally, they attend to the ways in which medieval histories crossed linguistic and geographical borders. Together, they trace multiple temporalities and productive anachronisms that fuelled some of the most innovative medieval writing. 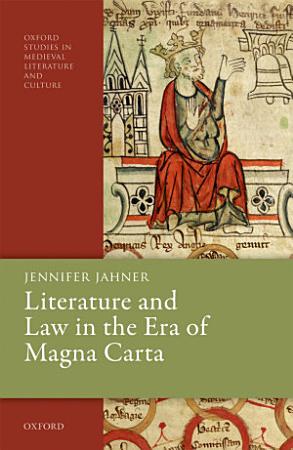 
Oxford Studies in Medieval Literature and Culture showcases the plurilingual and multicultural quality of medieval literature and promotes work that not only focuses on the whole array of subjects medievalists now pursue—in literature, theology, philosophy, social, political, jurisprudential, and intellectual history, the history of art, and the history of science—but also work that combines these subjects productively. It offers innovative and interdisciplinary studies of every kind, including but not limited to manuscript and book history, linguistics and literature, post-colonial and global studies, the digital humanities and media studies, performance studies, the history of affect and the emotion, the theory and history of sexuality, ecocriticism and environmental studies, theories of the lyric, of aesthetics, of the practices of devotion, and ideas of medievalism. Literature and Law in the Era of Magna Carta traces processes of literary training and experimentation across the early history of the English common law, from its beginnings in the reign of Henry II to its tumultuous consolidations under the reigns of John and Henry III. The period from the mid-twelfth through the thirteenth centuries witnessed an outpouring of innovative legal writing in England, from Magna Carta to the scores of statute books that preserved its provisions. An era of civil war and imperial fracture, it also proved a time of intensive self-definition, as communities both lay and ecclesiastic used law to articulate collective identities. Literature and Law in the Era of Magna Carta uncovers the role that grammatical and rhetorical training played in shaping these arguments for legal self-definition. Beginning with the life of Archbishop Thomas Becket, the book interweaves the histories of literary pedagogy and English law, showing how foundational lessons in poetics helped generate both a language and theory of corporate autonomy. In this book, Geoffrey of Vinsauf's phenomenally popular Latin compositional handbook, the Poetria nova, finds its place against the diplomatic backdrop of the English Interdict, while Robert Grosseteste's Anglo-French devotional poem, the Château d'Amour, is situated within the landscape of property law and Jewish-Christian interactions. Exploring a shared vocabulary across legal and grammatical fields, this book argues that poetic habits of thought proved central to constructing the narratives that medieval law tells about itself and that later scholars tell about the origins of English constitutionalism. 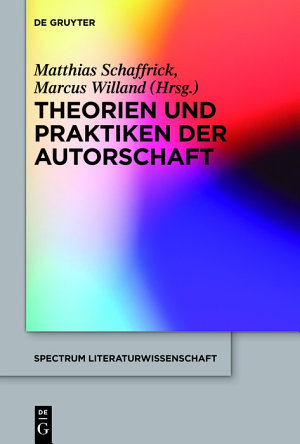 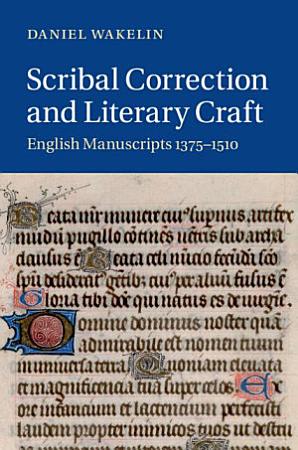 
This extensive survey of scribal correction in English manuscripts explores what correcting reveals about attitudes to books, language and literature in late medieval England. Daniel Wakelin surveys a range of manuscripts and genres, but focuses especially on poems by Chaucer, Hoccleve and Lydgate, and on prose works such as chronicles, religious instruction and practical lore. His materials are the variants and corrections found in manuscripts, phenomena usually studied only by editors or palaeographers, but his method is the close reading and interpretation typical of literary criticism. From the corrections emerge often overlooked aspects of English literary thinking in the late Middle Ages: scribes, readers and authors seek, though often fail to achieve, invariant copying, orderly spelling, precise diction, regular verse and textual completeness. Correcting reveals their impressive attention to scribal and literary craft - its rigour, subtlety, formalism and imaginativeness - in an age with little other literary criticism in English.