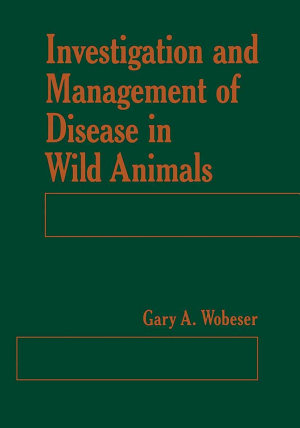 
- A hypothesis is a proposition, set forth as an explanation for the occurrence of a phenomenon, that can be tested. - The basis for scientific investigation is the collection of information to formulate and test hypotheses. - Experimental methods measure the effect of manipulations caused by the investigator; observational methods collect information about naturally occurring events. - There are three sub-types of experimental techniques that differ in the way subjects are chosen for inclusion in the study, in the amount of control that the investigator has over variables, and in the method used to assess changes in other variables. - Descriptive observational studies dominate the early phase of most investigations and involve the description of disease-related events in the population. Associations among factors may be observed but the strength of the associations is not measured. - Analytical observation al techniques are of three basic types: prevalence surveys, case:control studies, and incidence or cohort studies. All attempt to explain the nature of relationships among various factors and to measure the strength of associations. - Prevalence surveys and case:control studies deal with disease existing at the time of the study; incidence studies are concerned with the development of disease over time. - Observational studies may be retrospective, using existing data, or prospective with collection of new information. 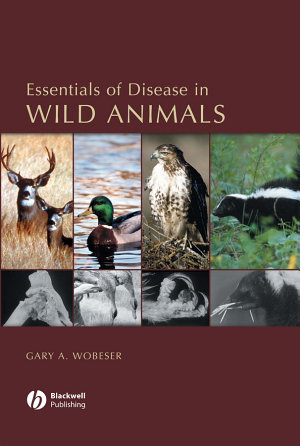 
The interrelationship between wild animal, domestic animals andhuman health is appreciated now more than ever before. This isbecause of the recognition of the involvement of wild animals indiseases of humans and domestic animals, the impact of disease onwildlife management and conservation biology, recognition of newforms of environmental contamination, and academic interest indisease as an ecological factor. This is the first introductory level book about disease in wildanimals that deals with basic subjects such as the nature ofdisease, what causes disease, how disease is described andmeasured, how diseases spread and persist and the effects ofdisease on individual animals and populations. In contrast toauthors of many other veterinary books, Gary A. Wobeser takes amore general approach to health in wild animals, recognizing thatdisease is one ecological factor among many and that disease cannever be considered satisfactorily in isolation. Rather than focuson individual causative agents and their effect on the individualanimal, the emphasis is on why disease occurred, and on the complexinteractions that occur among disease agents, the environment andhost populations. Written by a leading researcher in wildlife diseases, this bookwill fill a knowledge gap for those called to work with disease inwild animals who lack experience or training in the generalfeatures of disease as they relate to wild animals. Veterinarians,ecologists, wildlife biologists, population biologists and publichealth workers will find this book invaluable.


Gary Wobeser's successful book from 1994 has been completely updated and enlarged in a new second edition. An in-depth overview of the available techniques for the investigation and management of disease in free-ranging animals is provided. The subjects are illustrated with examples drawn from around the world, with emphasis on the special requirements involved in working with wild animals. The book draws on the author’s training as a wildlife biologist. 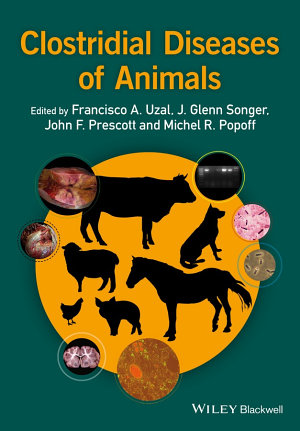 
Clostridial Diseases of Animals is the first book to focus on clostridial diseases in domestic and wild animals, offering a comprehensive reference on these common diseases. Emphasizing clinical applications, the book offers a complete, in-depth examination of clostridial disease, from pathogenesis, pathology, and microbiology to diagnostic techniques, clinical management, and treatment. Combining pathology and microbiology, a highlight of the book is the high-quality clinical photographs, which are valuable for recognizing disease patterns. The book begins with sections on the pathogenic clostridia and the toxins produced, then covers specific diseases produced by the pathogenic clostridia. Clostridial Diseases of Animals summarizes current understanding of clostridial diseases and discusses important areas of diagnostic uncertainty, making it an essential reference for veterinary clinicians, diagnosticians, pathologists, microbiologists, students, and governmental agencies. Key features Provides a single resource for all aspects of clostridial diseases Presents current, comprehensive information with a focus on clinical relevance Covers each disease in depth, including etiology, epidemiology, clinics, gross pathology, histopathology, diagnostics, diagnostic criteria, prophylaxis, control, and treatment Written by the world-leading experts in the field of clostridial diseases in animals Offers photographs and summary tables to support the concepts discussed in the text and aid in recognition 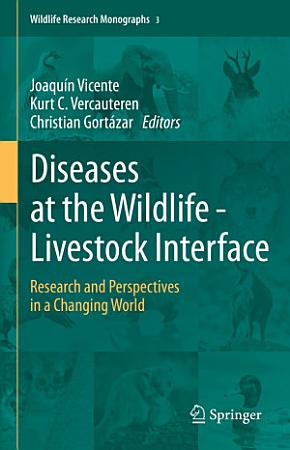 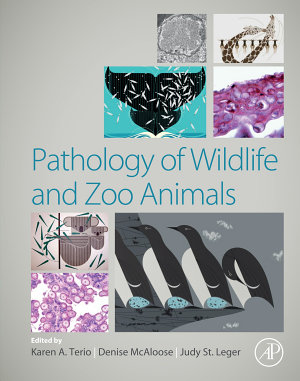 
Pathology of Wildlife and Zoo Animals is a comprehensive resource that covers the pathology of wildlife and zoo species, including a wide scope of animals, disease types and geographic regions. It is the definitive book for students, biologists, scientists, physicians, veterinary clinicians and pathologists working with non-domestic species in a variety of settings. General chapters include information on performing necropsies, proper techniques to meet the specialized needs of forensic cases, laboratory diagnostics, and an introduction into basic principles of comparative clinical pathology. The taxon-based chapters provide information about disease in related groups of animals and include descriptions of gross and histologic lesions, pathogenesis and diagnostics. For each group of animals, notable, unique gross and microscopic anatomical features are provided to further assist the reader in deciding whether differences from the domestic animal paradigm are "normal." Additional online content, which includes text, images, and whole scanned glass slides of selected conditions, expands the published material resulting in a comprehensive approach to the topic. Presents a single resource for performing necropsies on a variety of taxa, including terrestrial and aquatic vertebrates and invertebrates Describes notable, unique gross and microscopic anatomical variations among species/taxa to assist in understanding normal features, in particular those that can be mistaken as being abnormal Provides consistent organization of chapters with descriptions of unique anatomic features, common non-infectious and infectious diseases following brief overviews of the taxonomic group Contains full-color, high quality illustrations of diseases Links to a large online library of scanned slides related to topics in the book that illustrate important histologic findings 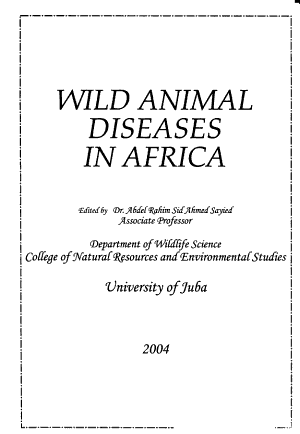 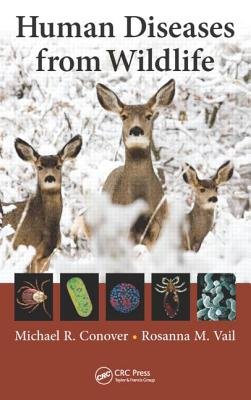 
Human Diseases from Wildlife presents information on the most prevalent and serious zoonotic diseases in the US and Canada, some of which have been national headline news like anthrax, influenza, and West Nile virus. Diseases that are caused by pathogens with the ability to infect both humans and animals are known as zoonotic diseases, which literally means "disease from animals." The issue of human–wildlife disease interactions is a growing concern as humans continue to interface with wildlife. People who handle wildlife including field workers, wildlife professionals, trappers, and hunters want to know about potential diseases, risks, and how to protect themselves from disease. This book was written because many people are uninformed about zoonotic diseases. This lack of information causes some people to have a heightened fear of zoonotic diseases, preventing them from enjoying wildlife or spending time outdoors. Other people needlessly expose themselves to disease by neglecting simple precautions. This book includes information on bacterial, spirochetal, rickettsial, and viral diseases as well as macroparasites and emerging zoonotic diseases. More than two dozen diseases are covered including rabies, tularemia, baylisascariasis, salmonellosis, leprosy, Lyme disease, Rocky Mountain spotted fever, and swimmer’s itch. Each chapter contains the history of the disease, symptoms in humans, medical treatment, transmission of pathogens to humans, the role of wildlife as vectors, and methods to minimize risk. The diseases people can contract from wild animals can be both threatening and fascinating, and the book includes interesting information to make it more enjoyable to read.


The Role of Animals in Emerging Viral Diseases presents what is currently known about the role of animals in the emergence or re-emergence of viruses including HIV-AIDS, SARS, Ebola, avian flu, swine flu, and rabies. It presents the structure, genome, and methods of transmission that influence emergence and considers non-viral factors that favor emergence, such as animal domestication, human demography, population growth, human behavior, and land-use changes. When viruses jump species, the result can be catastrophic, causing disease and death in humans and animals. These zoonotic outbreaks reflect several factors, including increased mobility of human populations, changes in demography and environmental changes due to globalization. The threat of new, emerging viruses and the fact that there are no vaccines for the most common zoonotic viruses drive research in the biology and ecology of zoonotic transmission. In this book, specialists in 11 emerging zoonotic viruses present detailed information on each virus's structure, molecular biology, current geographic distribution, and method of transmission. The book discusses the impact of virus emergence by considering the ratio of mortality, morbidity, and asymptomatic infection and assesses methods for predicting, monitoring, mitigating, and controlling viral disease emergence. Analyzes the structure, molecular biology, current geographic distribution and methods of transmission of 10 viruses Provides a clear perspective on how events in wildlife, livestock, and even companion animals have contributed to virus outbreaks and epidemics Exemplifies the "one world, one health, one medicine" approach to emerging disease by examining events in animal populations as precursors to what could affect humans 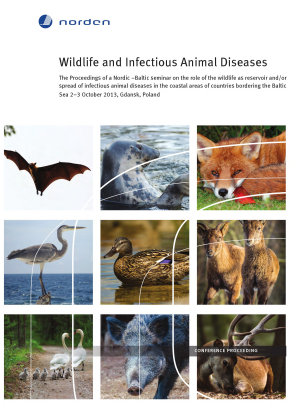 
Many infectious diseases of domestic animals and humans have reservoirs in wild animals. One of these diseases is rabies which worldwide causes more than 55.000 deaths pr. year. Climatic changes, human population growth, certain livestock production systems and continued globalization enhance the interface between wildlife, domestic animals and man. The wildlife component of this triad has received inadequate attention in the past to effectively protect man, livestock, poultry and pet animals. The seminar held in Gdansk, Poland 2 – 3 October 2013 highlighted how the wildlife has high economic, ecological, social and cultural value for the coastal areas bordering the Baltic Sea and how it contributes to recreation. Nevertheless, the wildlife plays also an important role in the spread of infectious diseases and thereby the need for focus on disease surveillance and control measures. 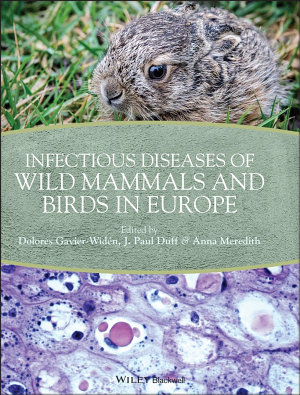 
Infectious Diseases of Wild Mammals and Birds in Europe is a keyresource on the diagnosis and treatment of infectious diseases inEuropean wildlife that covers the distinctive nature of diseases asthey occur in Europe, including strains, insect vectors, reservoirspecies, and climate, as well as geographical distribution of thediseases and European regulations for reporting, diagnosis andcontrol. Divided into sections on viral infections, bacterialinfections, fungal and yeast infections, and prion infections, thisdefinitive reference provides valuable information on diseaseclassification and properties, causative agents, epidemiology,pathogenesis, and implications for human, domestic and wild animalhealth. Key features: • Brings together extensive research from many differentdisciplines into one integrated and highly useful definitivereference. • Zoonotic risks to human health, as well as risks to petsand livestock are highlighted. • Each disease is covered separately with practicalinformation on the animal species in which the disease has beenrecorded, clinical signs of the disease, diagnostic methods, andrecommended treatments and vaccination. • Wildlife vaccination and disease surveillance techniquesare described. • Examines factors important in the spread of disease such aschanging climate, the movement of animals through trade, andrelaxations in the control of wide animal populations.